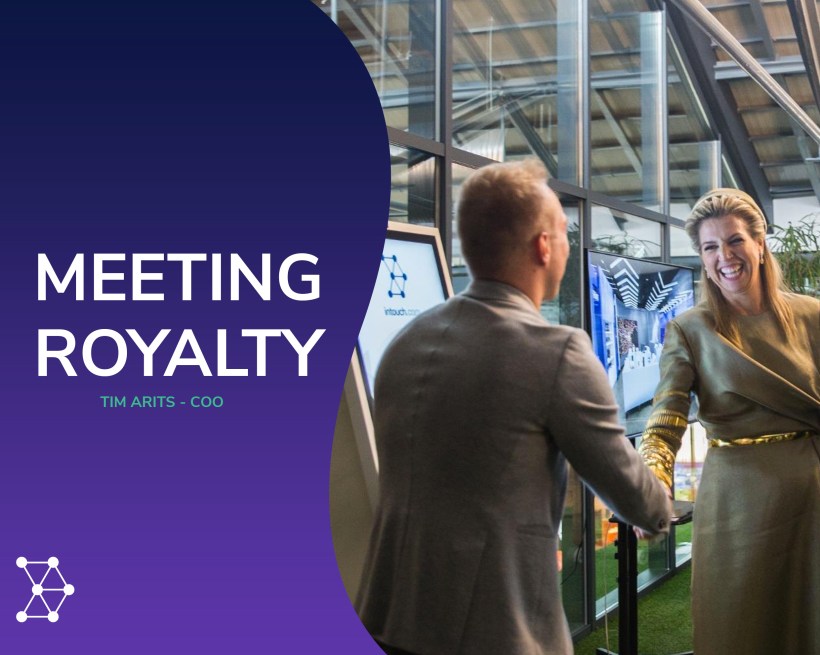 Life At Intouch is a blog series about the wonderful people that make Intouch successful.

The aim is to show what our team are passionate about outside of work. This week we have Tim Arits our Co-Founder & COO discussing his meeting with the King & Queen of the Netherlands

It’s not often you get to rub shoulders with Royalty but in June of this year our COO Tim Arits was invited to speak with Willem-Alexander of the Netherlands & Queen Máxima of the Netherlands. I sat down to chat about how it came about and what it meant to Tim and his family.

So, firstly, how did meeting the royal couple come about?

The royal couple came to Ireland for a state visit to strengthen the ties between the Netherlands and Ireland as if the United Kingdom leaves the European Union, Ireland will become more isolated from the rest of the EU.

Ireland hosted the King and Queen of the Netherlands. They stayed in the Phoenix Park, at the residential house for state visitors, and a programme was organised for the royal couple. One of the elements of the programme was to visit DogPatch Labs for the ‘Smart City’ initiative. DogPatch Labs is a community space for entrepreneurs. They host state visits, so they took one hour of the royal couples time, meticulous planned to the minute. It just so happened that there were two Dutch guys working at DogPatch Labs, and they helped organise the state visit, I was lucky that they included me in the proceedings. Patrick was also very helpful. He’s the founder and CEO of Dogpatch . They got me in.

You presented to them, were you aware in advance that you were going to present, or was it more spur of the moment?

They asked me to present up front. It needed to be prepared well in advance. There was very rigorous planning for their whole time in the country. Dogpatch Labs had the royal couple for an hour, and every minute was planned. You need to get security clearance, otherwise you can’t come closer than 4 metres to the royal couple. So lots of planning in advance, and I had to submit the content well before, I needed to let them know exactly what I was going to say.

So what did you talk about exactly?

I only had 60 seconds, so when I spoke to them, I explained exactly what we are doing at Intouch.com, the King immediately gave a compliment of the where the business was, and how we were thinking about it.

So he got it straight away.

Yeah he got it, the Queen did as well, she asked some really interesting questions about the market we are in, and how we are looking at certain aspects. She really had a very in-depth knowledge about what we were doing, so they were really lovely. Officially, I had 60 seconds, but I think I had about 3/3.5 minutes, so it was great.

That’s fantastic. At the time of the presentation, did the King and Queen get a chance to interact with the screens? Did they see the technology?

Yes, they did! It recognized their gender and they interacted with it, it was great to have them see the demo. It was very short, a brief moment for them to see what Intouch.com are doing, but it was great.

So the tech recognized their gender and age, understood the personas and then individually recommended them relevant products?

Yes, I then explained how it happens to them, and the King congratulated me, saying it was very well done, he then complemented the business and the journey. He asked a few questions, as did the Queen, and next thing I knew it was over! The media came in, and I had a brief interview with De Telegraaf, the Dutch news outlet, that was great to get some publicity.

Did they ask about the companies relationship with the Netherlands?

For Dutch people, it’s a very big honour, I know that most countries don’t have a Royal couple. We have a Prime Minister in the Netherlands too, who runs the country from day-to-day, I think especially for the older generation who have lived through the war, the Royal couple have an even more special role in the eyes of the people. They’re very popular, and they are descendants of the first King of the Netherlands. Especially for my grandparents, it was a very big deal, because during the war, the royal couple had a really important role in keeping the country inspired and giving them hope, and keeping the morale high. It was one of the reasons why they felt it was such an honour. An honour for me of course, but also for them to see me.

How was it for you on a personal level? You could really even believe what was happening?

I was very nervous the morning of the event. My dad flew over from the Netherlands to actually be there, it was definitely nerve-wracking at the beginning, especially because there is so much security, everybody has to be on time. We were screened by the Garda and the Dutch Secret Intelligence. There was a lot that went into it. But in the end, they are just people. I mean, obviously extremely important and famous people, but they are human.

So, professionally then, how was it for you?

It was a milestone for myself and for the company, that we were at a position where we would be asked to present in front of the King and the Queen. We built something out of nothing, and it’s these moments that you really realise that something is actually happening. So, that was really cool. Professionally, it made us realise that we have come a long way from an idea to something that was basically more material, so that was really cool.

After it happened, did it motivate you to keep pushing to greater heights?

I was very grateful, I mean getting here was only possible with the help of a lot of other people, and it was a really big honour for me because they are the Dutch royals, but I was really grateful for all the help, especially from my co-founders Doychin and Sam and also from the team, everyone was involved. From Greg and Brendon to get the demo ready, and really, I’m just grateful to have such a great team around me. It was a big deal for me, but everyone helped me to get there.

I can only imagine how it must have felt. If I presented to the President of Ireland, it would be huge!

Funny enough, the day after the presentation, there was an event happening at the Bord Gais Energy Theatre, the Dutch King and Queen invited Michael D. Higgins and his wife to a special event of the Dutch Dancing theatre group had a performance in the BGE theatre, and I was lucky enough to be invited to the event also. I ended up sitting two metres from Michael D. Higgins and his wife, and the King and Queen. I also met the Minister for Foreign Affairs for the Netherlands. It was great.

Has there been any further contact or results from the presentation?

So, the day we presented, we got a phone call from a Dutch group of retailers and brands, I think it was seven or eight retailers and a good few brands/suppliers as well, they asked if they could drop by the day after to chat. From that, we have found one new partnership, and are talking to a few more about potential next steps, so that was actually really helpful. So the visit itself actually resulted in business for us.

It must be great for you to be working with Dutch companies.

Yes, it is, but at the same time, I don’t mind that much. We are very global as a company, most of us here have lived outside of our native countries for long periods of time now. It’s nice to do business with Dutch people, I like doing business with someone as much in Dubai, or New York. But it’s great for bringing back memories, and also to be speaking in Dutch.

Jack Hussey
SCHEDULE A 20 MINUTE CONSULTATION WITH ONE OF OUR RETAIL EXPERTS.
KEEP IN TOUCH